Recall that, the Ogun State chapter of PDP on Monday suspended Mr. Jimi Lawal alongside four others who are: Bola Odunmosun, the Financial Secretary of the party, Fasiu Ajadi, Kola Akinyemi and Tope Asiru, the party chairman of Ijebu Northeast local government area.

The Secretary of the party, Sunday Solarin announced their suspension at a press briefing at the party’s secretariat in Abeokuta, the state capital.

According to Solarin, Lawal and others were suspended for violating the constitution of the party by conducting and participating in an “illegal” governorship primary election which was not authorized by the National Working Committee (NWC) of the party.

Solarin disclosed that, Lawal and the others have been suspended for one month pending the outcome of a disciplinary committee which would be set up to review their action.

However, the Organizing Secretary of the party, Kayode Ogunyemi in a petition addressed to the Inspector General of Police, Usman Alkali Baba, asked for the arrest of the Peoples Democratic Party (PDP) in Ogun State, Jimi Lawal, for alleged forgery. 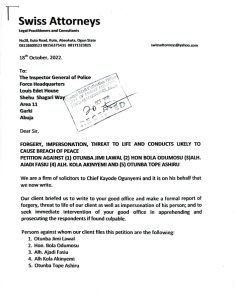 Ogunyemi in the petition dated October 18, 2022 equally asked the IGP to arrest four other suspended members of the party, Bola Odumosu, Ajadi Fasiu, Kola Akinyemi, and Tope Ashiru, over the same allegation.

Ogunyemi accused the five of forgery, impersonation, threat to life, and conducts likely to cause breach of peace.

According to an acknowledged copy of the petition made available to THE ENCOUNTER NEWS, Ogunyemi sought the immediate intervention of the IGP in “apprehending and prosecuting the respondents, if found culpable.”

In the petition, Ogunyemi said his signature was sighted in a letter purportedly written to the Independent National Electoral Commission (INEC), asking the commission to attend and monitor a fresh primary election held on Monday by the Jimi Lawal camp.

Ogunyemi maintained that the letter co-signed by Odumosu was done without his knowledge.

The petition signed by his counsel, Dr. Oladimeji Balogun of Swiss Attorneys, Abeokuta, said in the past few days, Ogunyemi explained that the respondents’ letter to INEC had incited the party’s members against him, saying people now engage him in open confrontation.

The petition partly read: “Our client briefed us to write to your good office and make a formal report of forgery, threat to life of our client as well as impersonation of his person; and to seek immediate intervention of your good office in apprehending and prosecuting the respondents if found culpable.

“First, our client denies a prior knowledge of the said letter and states that the said letter which was purportedly signed on his behalf does not represent our client’s resolve to follow the directives and the overriding decisions of the Peoples Democratic Party.

“The persons who issued the letter are mischievous impostors whose impersonation was not inadvertent. It was directed towards maligning our client and destroying his fast emerging political popularity.

“The past few days have been challenging to the Peoples’ Democratic Party’s members including our client. The Respondents’ letter scored its point when it incited the already irking members of our client’s political party, some of who had engaged our client in open confrontation on several occasions.

“Our client has been subjected to physical attacks with plethora of threats, blaming our client for issuing the said insensitive, inappropriate, and irresponsible correspondence with sheer disregard to the party’s resolve to challenge the judgments delivered by the Federal High court in the abovementioned suits at the Court of Appeal.

“Our client can no longer sleep with his eyes closed as he receives calls threatening his life and that of his beloved ones, demanding that our client gives a logical reason for the issuance of the letter.

“Members of the Peoples’ Democratic Party now relate with our client with scorn, tagging him as a dissident within the party.”