.....As SWAGA Women Launched In Abeokuta

Adeyeye spoke in Abeokuta, Ogun State, on Monday during the inauguration of the SWAGA women wing in the state.

The former Minister noted that Tinubu has “greatest respect for Nigerian women”, and he had promised to include higher percent of women at the forefront of his administration.

He described Tinubu as a man of vision, passion and action. 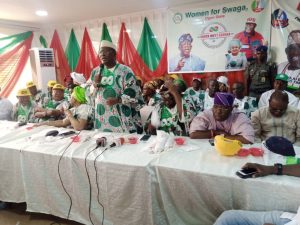 Adeyeye said “Asiwaju has said that Nigerian women under his incoming administration, by the Grace of God, will have the best of opportunities, the better life, more than what have ever had before in the history of this country. Women will be in forefront of his administration. He has promised it already and we trust and believe him.

“He is a man who has a greatest respect for women. We will soon reach the promised land. El dorado is coming for all Nigerian women.”

The Convener of SWAGA, Hon Oyetunji Ojo explained that the newly inaugurated state executives have a responsibility to put in place SWAGA women wing at council, ward and unit levels.

Ojo, who was a member of House of Representatives, charged the women to go to the nooks and crannies of the state and propagate Tinubu’s ambition.

While describing Tinubu as the best replacement for President Muhammadu Buhari, Ojo said the APC presidential candidate has plans to positively transformed governance in Nigeria.

Why Obidients Are Angry – Obi

Why Obidients Are Angry – Obi