by Vision Update
in Law and Order
0 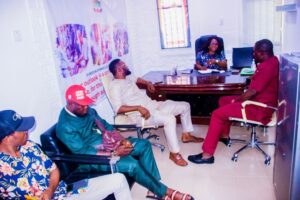 The Senior Special Assistant to the Governor on community Communications, Mrs. Mary Oso Omotoso received in audience some Ekiti Youths popularly known as “BAO Boys “in her Office in Ado Ekiti.

According to them, the meeting with the SSA was aimed at familiarizing with her office being an intermediary between the state government and the people at the grassroots.

Mrs. Omotoso observed that the BAO Boys by virtue of their network across towns and villages, play important role in getting honest feedback for the government from the “streets“ noting that they are like roving reporters who have ears and eyes everywhere.

She however reiterated the commitment of Governor Biodun Oyebanji to their welfare and well – being assuring that Mr. Governor is a leader that can be trusted.

Earlier in their reactions , two leaders of the group; Hon. Dayo “Ijaya” and Mr Awolowo expressed delight over the readiness of the SSA to receive them and also raised some of their concerns for government’s attention while pledging their total support for Governor Oyebanji’s administration.

NEPZA has declared its readiness in ensuring an unprecedented growth

NEPZA has declared its readiness in ensuring an unprecedented growth