by Vision Update
in News
0

The head office of Environmental Rights Action (ERA) in Benin City, the Edo State capital, is awash with loud music that is luring everyone to the dancing floor. 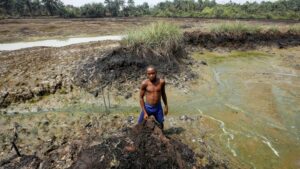 ERA, Nigeria’s foremost environmental rights advocacy group is however, not throwing any Christmas party for its staff and volunteers.

The group is celebrating its latest victory over the Anglo-Dutch oil and gas major, Shell.

Shell has been on the firing line in the Niger Delta, widely regarded as the worse polluted oil region in the world. The big oil has been in the region since oil was found in commercial quantity in Oloibiri, a rustic Ijaw community in Bayelsa State.

Inhabitants of this community are mainly fishermen and farmers. As the first place oil was first discovered in Nigeria, they have nothing to show for it other sad tales of environmental despoiliation.

Unarguably, Oloibiri is a historic town to the oil and gas industry in Nigeria. Nigeria’s first commercial oil discovery in Oloibiri town by Shell Darcy on January 15, 1956.

Sadly, the discovery of oil in the region has not yet helped most of the citizenry.

For pro-people organisations like ERA, “it has only led to destruction of the environment and the way of life of indigenous people of the Niger Delta.”

With an initial production of 5,000 barrels of oil per day, which later shut up to two million barrels, Nigeria became the 6th largest oil producer on the chart of the Organisation of petroleum Exporting Countries (OPEC).

However, ERA’s Executive Director, Chima Williams, a lawyer, told this reporter on telephone this Friday that Shell has accepted to pay compensationfor oil spills in three Niger Delta communities.

Four Nigerian farmers and their fellow villagers are to receive 15 million euros from the Nigerian subsidy of Shell as compensation for oil pollution in their villages.

According to ERA which also doubles Friends of the Earth Nigeria, “this historic victory at the courts and the acceptance of Shell to do the needful is a victory for all.”

In 2007, the farmers and fishermen, together with Friends of the Earth Netherlands, initiated legal proceedings against the headquarters of Shell in The Hague because of the oil pollution which took place between 2004 and 2007 in the villages of Goi, Oruma and Ikot Ada Udo.

Friends of the Earth Netherlands, together with the ERA big chief, and Channa Samkalden, took up the case and have been in court since 2008.

The proceedings took so long that all the original claimants (Barizah Dooh, Chief Oguru, Elder Friday and Alali Efanga) have since died.

Now, over 15 years later, the farmers and their fellow villagers are to receive compensation.

According to Plaintiff Eric Dooh, “the compensation we receive from the court case in the
Netherlands will enhance a total transformation of the community people and myself in terms of
reinvestment in our environment. It will be a relief for all of us when the money is finally paid as
compensation for our losses after a long time of legal action against Shell.”

For Chima Williams, “justice may have been delayed but it has now been served. The resilience of the farmers, their communities, and determination to make Shell pay is a model that will galvanize other impacted communities in the Niger Delta and elsewhere
to act and stay on course.

“Shell’s acceptance to pay compensation and install leak detection system is both unprecedented and signals victory for all parties – the victims, environmental justice
campaigners and Shell.

“Further more, if Shell can do this, it means that there is no hiding place for any corporate polluter as they may run, but cannot hide from the long arms of the law”, says ERA.

Pioneer ERA big boss and a leading member of the Board of Environmental Rights Development Foundation,
Nnimmo Bassey, says “the victory of the Niger Delta farmers is a testament that Big Polluters may
run but will find nowhere on earth to hide because they will be sought out. We celebrate the farmers still alive to savour this victory and believe the spirit of the deceased four Niger Delta farmers and others will now rest, but corporate polluters will never rest until their operations and attitudes in respect for their hosts, protection of their environment, livelihoods and humanity is guaranteed”.

Celebrating this historic feat, Paramount Ruler of
Oruma (Yiba-Ama) community, Pere Wapeabiama David Amakiri, intoned “though the compensation Shell agreed to cannot replace human lives, we have been able to show through our patience and determination in the last 15 years that peoples power will always truimph corporate behemoths. Shell has learnt a good lesson”

On his part, Mene Stephen Kobani, Paramount Ruler of Goi, an Ogoni community in Rivers State, unequivocally advised, “we anticipate that other co-travellers in the fossil fuels industry will now understand that the fires
the Niger Delta farmers and fishermen lit in 2008 will continue to rage until they pay up and clean up for their mess in every Niger Delta environment”

Shell headquarters resisted every argument to take responsibility for the actions of its subsidiary and
even demanded instead that the case should be heard in a Nigerian court, But the Dutch Court refused
and in January, 2021 ordered Shell to pay compensation to the Nigerian farmers, to clean up the
pollution, and take measures to prevent new spills by installing a leak detection system near Oruma.

Following the verdict of the court, Friends of the Earth Netherlands and Shell conducted negotiations
to determine the amount of compensation to be paid.
Unprecedented case

This Nigeria case is unprecedented: for the first time in history a corporate headquarters has been held responsible for the actions of their subsidiary in another country.

Shell resisted the claim for
many years, arguing from their headquarters in the Netherlands that the case should be heard in a
Nigerian court.

The Dutch Court did not agree.
In 2021, the court ordered Shell to pay compensation to the Nigerian farmers, to clean up the mess,
and to take measures to prevent new spills by installing a leak detection system near Oruma.

Following the verdict of the court, Friends of the Earth Netherlands and Shell conducted negotiations to determine the amount of compensation to be paid.

Residents of Oruma, Goi and Ikot Ada Udo are finally getting compensation, but there are
thousands of other villages in the Niger Delta in similar circumstances and this case makes no difference to them.

As a result of oil pollution, infant mortality in the Niger Delta is twice as highas in the rest of the country. Farmers and fishermen have lost their livelihoods.

Shell continues drilling in 2021, Friends of the Earth Netherlands with the four Niger Delta farmers won the case against
Shell for oil spill pollution in Nigeria and the Shell Climate Case where at the claims of Friends of
the Earth Netherlands, the court ordered Shell to reduce its global emissions by 45% by 2030.

Logically speaking, Shell can no longer explore new oil and gas sources. Yet recent data research
shows that Shell is continuing large-scale investments in oil and gas, thus avoiding its
responsibility and ignoring human rights. If we want to prevent the damage caused by climate
change increasing still further, we really must stop using fossil fuels. Shell is doing precisely the
opposite.

Friends of the Earth Nigeria and Netherlands are arguing for strong legislation to prevent this and is working hard to achieve this on a national and international level. In the battle against dangerous climate change, a societal duty of care for companies is vital.

Yuletide: Excitement As Governor Oyebanji Reaches Out To Groups In Ekiti.*