by Vision Update
in Politics
18 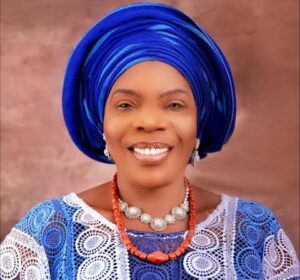 The Ekiti State Deputy Governor, Chief Mrs Monisade Afuye has reached
out to the two constituencies which comprise of eleven wards in Ikere
town in the spirit of yuletide.

Chief Monisade Afuye who paid a visit to the palaces of Ogoga, Oba
Adejimi Adu Alagbado and Olukere, Oba Ganiyu Obasanyin donated bags of
rice, a cow, cash gift and other consumables for the Ogoga and Olukere
in- council.

The Deputy Governor showed appreciation to Ogoga in council, Olukere
in council and the Ikere indigenes at large for their unflinching
support during electioneering campaign. She however solicited further
support of the Ikere people towards achieving the positions of the
State Assembly and the presidential position for the APC candidates.

Chief Afuye who further toured round the 11 wards across Ikere town
donated cash gift to each ward to celebrate the festive period and to
encourage them to be more supportive towards the Biodun Oyebanji led
administration.

While addressing the citizens at their respective wards, the number
two citizen promised to be giving ten people in each ward comprising
of five males and females stipends on the roaster of six months per
ward individuals.

In their various addresses, the Ogoga, Oba Adejimi Adu Alagbado and
Oba Obasanyin appreciated God for his divine arrangement to have
placed Chief Monisade Afuye to be the Deputy Governor of Ekiti State
and promised his full support for the successful tenure of the Deputy
Governor.

Ogoga further urged his council and the Ikere citizens at large to
ensure continued support for the Deputy Governor describing her as
daughter of the soil and her position is meant to better the lot of
Ikere kingdom.

Oba Adejimi Alagbado further prayed for the Ikere sons and daughters
whom God has placed in high positions never to be relegated.

In their reactions, the ward leaders, Mr Olu Orekunrin and Pst.
Adelakun among others appreciated the Deputy Governor for the laudable
gesture, describing it as one worthy of emulation by other political
office holders and prayed that God would forever elevate the Deputy
Governor.

They thereafter pledged the unalloyed support for the Deputy Governor
towards achieving a landmark success in the Oyebanji’s administration.