by Vision Update
in Culture
0 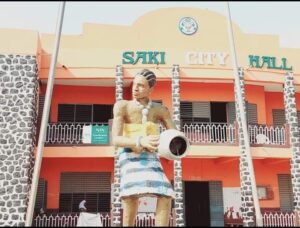 Saki is one of the most ancient Yoruba town and it is located on longitude 30. 42 East and Latitude 8.41 North it is about 1,500 meters above sea level. There are many hills in and around Saki. Asabari which is the highest among them is above 2,000 meters above sea level. Saki is about 184 kilometers North-West to Ibadan (The capital of Oyo state) and is the largest town on the border of Nigeria with the Republic of Benin. It is situated in the Savanna land with scattered trees.

An important stream called “Taba” flows through the town. It is this stream that supplied water to the citizenry of Saki throughout the year before the provision of pipe-borne water. The stream is still very useful until today. Another important stream which still flown through one side of Saki is “foofoo” which is now dammed to provide pipe-borne water for the town and villages. It has a population of over 350,000 inhabitants. Ogun, the eldest son of Oduduwa was said to have founded Saki between the period of late 12th and early or half of 13th centuries.

The historical fact behind this was that Lamurudu, the father of Oduduwa and his followers migrated to Niger area Bussau from Egypt this was as a result of religious crisis. At Bussau, Lamurudu assigned Ogun to go and make proper survey of “Yoruba kingdom” which he had been hearing before. Ogun rise up for the assignment and went to Saki where he discovered that Saki was a small villages and it was just like a hunter’s camp.

From Saki he went to Ibarapa, Lagos, Benin, Ife and again back to Saki. After the completion of the journey, Ogun came out with a report given to Lamurudu that there was a powerful group which was called “Igbo”. He said that the group was not easy to govern.

As a result of this, Ogun and Orisanla were sent to rule these people at Ife with a charm
(Gbetugbetu) but because of excessive drinking habit of Orisanla he could not carryout the assignment.

The charm was taken from him by Oduduwa and both Oduduwa and Ogun went straight to
establish Yoruba Kingdom at lfe. After the establishment of Yoruba kingdom, Oduduwa sent his children to different four corners of Yoruba Kingdom. Ogun was in Saki ruling. But it came to a time when Oduduwa became blind and Ogun took effective control of the kingdom. Saki, the ruling town of Ogun was taken temporarily as a seat of government of
Yoruba kingdom.

All directives came from Saki to other Yoruba towns because the acting head of the kingdom was at Saki. But eventually, the blindness of Oduduwa was cured by Ajibogun.

However, Oranmiyan (the last son of Oduduwa) and Oke-kisi (the cousin of Oranmiyan) jointly founded old Oyo Empire. But traditions reveal that there was conflict between Oranmiyan and Oke-kesi over a woman and this caused Oke-kesi to leave old Oyo for Saki hiding at Asabari hill.

With this, Oranmiyan sent some of his people to persuade Oke-kesi and return him to old Oyo off handed and Oranmiyan pronounced that “leave him” he’s running about”. (Onsakiri). It could be therefore adducted that from the statement of Oranmiyan “N Sakiri” that “Saki was derived. More over, this time, Ogun was at Ife assisting the aged-man (Oduduwa) in the administration of Yoruba kingdom. Later, misunderstanding arouse between Ogun and his wife Efunseeke over an act of adultery between Efunseeke and Gbayegborun (a Goldsmith) was committing adultery with his wife Efunseke who was a trader in gold silver rings and other articles.

Ogun was annoyed with his wife Efunseke she later packed her bag and baggage’s and went back to Saki. Ogun looked for her and he could not locate her where about. When Ogun knew that his wife returned to Saki, Ogun too went to Saki. When Efunseeke saw Ogun coming towards her she knew that Ogun would either forced her to go with him or kill her. But Efunseeke didn’t wanting either force her to go with him or kill her. Efunseeke sank into the ground at what is now Ogidigbo. Ogun saw his wife sinking down, and he also sank at the same place.

The place where hunters and other Ogun worshippers sacrifice to Ogun annually. Saki was the first settlement of Ogun and there he ended his life. This is the reason why people usually say; Ogun is a stranger at Ire but a native of Saki”. Akinbekun was said to be the first king of Saki. He was the son of Oranmiyan whom Egilolo (daughter of Kisra, the king of Ibadan) bore to him. Tradition reveal that Akinbekun met Oke-Kesi at Saki acting as the head of the town, but with arrival of Akinbekun from Ibariba to Saki, Oke-kesi handed the post of the king over to Akinbekun and he became the first recognized Okere of Saki.

Further more, a very important event was attached to the period of Akinbekun as a king of Saki because the emergence of River-Ogun was as a result of conflicts between the king
(Akinbekun) and his wife (Ekunsimi). It was said that Ekunsimi entered a forbidden room and she was rebuked with her heavy breast by the king. This caused Ekunsimi entered to leave the town and became a river (River Ogun near Iseyin).

Since that time, it has been forbidden for any reigning king (Okere) to look at the river while
passing through it. When Akinbekun was the king of Saki then, Oke-kesi happen to be (Oní Saki) because Akinbekun met Oke-kesi at Saki.

The terrain is hilly. The town lies near the source of the Ofiki River, the chief tributary of the Ogun River, about 40 miles (60 km) from the Benin border. It is referred to as the food basket of Oyo State because of its agricultural activities. It is the headquarters of Saki West local government authority.

Originally part of the Oyo Empire, Shaki became a Yoruba refugee settlement after the destruction in 1835 of Old Oyo (Katunga), 70 miles (113 km) east-northeast, by Fulani conquerors. By the early 1860s the Yoruba Mission had established an Anglican church in the town.

The traditional ruler is the Okere of Shaki town, Oba Khalid Olabisi Oyeniyi, the newly installed Ọ̀kẹ̀rẹ̀ of Shaki-Okeogun, Oyo State after the demised of Ọba Kilani Olarinre Olatoyese Ilufemiloye who died on Friday, 5 April 2013, 2 days to the first anniversary of his coronation. Since the death of Kilani Olatoyese Ilufemiloye Olarinre, the town has been without a Traditional Ruler as the process of selecting a new traditional ruler has been stalled by court litigation. However, the new king finally emerged on 18th December, 2019 after due consultation by the King makers and the state government.

Ogun (god of Iron) is from this town. Traditionally, the work of inhabitants in the olden days were blacksmith, goldsmith, farming, hunting and clay pot mouldering.

The crown: This is only for the king, it shows authority over all citizens of the kingdom.

The kings staff: This is used to stamp a declaration at a meeting.

The red beads: It was traditionally used by only the royal family, it was made with washed up red clay and tree stems. Now, it is just a traditional symbol worn by everybody.
The throne: This is the kings seat, it is seated in the kings chamber. Anybody that seats on the throne except the king, dies of skin illness.

Shaki is an exporter of cotton, swamp rice, teak, and tobacco. The flue curing of tobacco has been important in the area since 1940. Indigo is grown in the area for local dyeing, and the town is a centre of cotton weaving. Yams, cassava, corn (maize), sorghum, beans, shea nuts, and okra are grown for subsistence. Cattle raising is increasing in importance, and there is a government livestock station. Shaki has a government Hospital, many Private Hospitals and branch of UCH is under construction.

A 1,600-foot (490-metre) inselberg rises above the surrounding savanna.
The town is prominent in the production of aluminum pots (Ikoko) for cooking. Users of pots and sellers from far and near visit the town to purchase the product. Shaki Sango Market has also brought the town into limelight as buyers and sellers attend the market every Thursdays.

Shaki is the location of a Baptist Hospital and a Muslim hospital. The Muslim Hospital was commissioned by M.K.O Abiola in 1987. (Inclusive are various private hospitals, clinics and maternity and public primary health care centers)

It is home to the following educational institutions:-

To mention but few👌