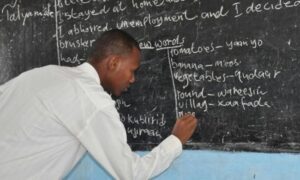 The appeal for support was made known in Ado Ekiti while the group
paid a courtesy visit to the Permanent Secretary, Ministry of Art,
Culture and Tourism at the Secretariat complex.

The team leader, together with other executive members of the
Socio-Cultural group said the visit was aimed at acknowledging the
efforts of the Ministry in promoting the cultural heritage of Yoruba,
of which language is an integral part.

The group appreciated the Ministry for upholding Yoruba heritage and
values as one of the pillars of Governor Biodun Oyebanji
Administration.

“One of the purpose of this visit is to see to the resuscitation of
Yoruba language from going into extinction and to prioritize the value
of art and culture of our tribe”. The group emphasized.

In her reaction, the Permanent Secretary Ministry of Art, Culture and
Tourism, Mrs Abosede Adaran thanked the group for coming and
appreciated God for the steps taken by the group.

She also charged them not to compromise the value they are carrying,
adding that she is ready to give her maximum support and cooperation
towards the success of all their programmes as far as the goal and the
objective are in line with the policy of the present administration.

Adaran advised them to involve all stake holders so as to bring back
the glory of the language from the cradle through elementary to the
tertiary education levels, explaining that the Ministry of Education
Science and Technology should include Yoruba language in school
curriculum and make it a core subject for certificate classes.