Hon. Osho Appeals to Constituents to Remain Calm, Hope For A Favourable Outcome At Supreme Court

by Vision Update
in News, Politics
0

Hon. Osho Appeals to Constituents to Remain Calm, Hope For A Favourable Outcome At Supreme Court 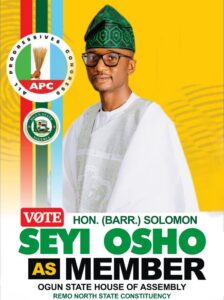 ….assures them of getting his mandate back at the Supreme Court.

Hon. Solomon Osho, member of the Ogun State House of Assembly representing Remo North State Constituency has reconfirmed his confidence in the Judiciary, saying he is optimistic that he will get his mandate back.

He further urged the good people of his constituents and his followers to remain calm and continue to campaign for the Party; APC.

His words: “My supporters and party faithfuls should remain calm, continue their business as usual, campaigning for the victory of our bParty and the re-election of the Governor, Prince Dapo Abiodun. The Will of God Almighty shall prevail at the end, because the voice of the people is the voice of God. The show of love and support from our people is so massive. Albeit, my stand has always been that the contest is not a do or die affair, nevertheless, we must always stand up against injustice, impunity and tyranny anywhere we find it. We must never stop to refuse to bear these traits in our society, not for any gain but for posterity sake”.

Quoting the iconic Nobel Laureate, Professor Wole Soyinka, Hon Osho said “There is no greater tyranny by an Emperor, than that which is perpetrated under the shield of the law and in the name of Justice. The man died in him who keeps quiet in the face of Injustice”.

Hon. Osho is currently at loggerhead in Court with Mr Adebiyi Adeleye, to determine who eventually becomes the authentic candidate for APC in the forthcoming 2023 House of Assembly Election for Remo North State Constituency.

It would be recalled that a federal high Court Sitting in Abeokuta had ordered the incumbent Barrister Solomon Osho as valid candidate for the party, on the grounds that Adebiyi Adeleye who was imposed as Candidate, did not resign his appointment as Special Adviser to the Governor and did not pay for Nomination and Notice of Interest Forms. However, in a recent judgment of the Court of Appeal in Ibadan, the Orders of the federal highCourt were set aside, and Adeleye was declared the Candidate on the grounds that Osho could not prove that Adeleye flouted any law.

Speaking to journalists in Abeokuta today, Hon. Osho said the judgement of the Appellate Court has been reviewed by his team of Lawyers, and necessary steps are ongoing.

The lawmaker also appealed to all his followers, party leaders and the good people of his constituents to remain calm, adding that with all the evidences at hand, he will surely get his stolen mandate back. “I am very optimistic that I will get my mandate you gave me back, and the rule of law shall prevail.” He went further to say he believes so much in the sanity and sacredness of the Highest Court in the Land; Supreme Court, to correct the abnormalities and errors of the Judgement of Court of Appeal Ibadan without being biased or prejudice.”

Speaking further, Hon. Osho who is also the Chairman House Committee on Justice, Ethics nd Public Petitions said, “For the past 3 & half years, I have tried my possible best to give and attract dividends of Democracy to Remo North and strived to fulfill all my Electoral promises to my people. As a loyal party man, I have wholeheartedly and consciously given my undiluted support to the government and administration of Prince Dapo Abiodun MFR. I am the only who ever moved a motion of “Vote of Confidence” on Mr Governor about 2 years ago on the floor of the House. I am one of the only few people who have sponsored the most Bills in the 9th Assembly, and got all of them assented into Law by the Governor. I organized annual free Holiday Coaching for all our secondary school students, with free school buses for ease of mobility, and annual Christmas children party amongst others.

“We have also given out hundreds of scholarship awards to outstanding pupils and orphans in my Constituency, as well as free UTME/Jamb forms and extensive training on CBT/ICT to our youths in preparation to go to higher institutions. Various educational programs were also sponsored by myself, such as Debate and Impromptu Speech competition in Remo/Ijebu dialect to promote our dialect amongst the pupils, and Bi-Annual Empowerment programs to train hundreds of our women and youths on various skill acquisition trainings, such as Soap making; Wig making, Make up, Hairdressing, Bead making, Paint making and catering/Baking. Inter-Secondary School football competitions and Inter-Primary school Athletics Games were also organized via my personally founded NGO, named May-Five Foundation.”

“Furthermore, in the next few days/weeks, by God’s grace, we will be commissioning the just completed Water project at Akaka-Remo and the nearly completed Doctor’s Quarters at the Primary Health Centre, Ode-Remo.”