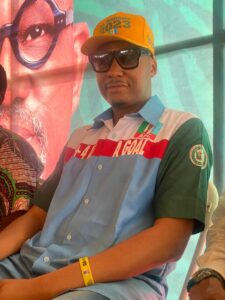 As the All Progressives Congress (APC) gears up for the upcoming general elections, Engineer Adebare Abolurin has emerged as a leader who is committed to the party’s mission and values and is doing everything in his power to ensure the party’s success.

Recently, he made a generous donation of customized caps and cash to the campaign of Prince Tunde Tella, the party’s candidate for the Abeokuta North House of Assembly.

This act of generosity was announced during a visit by Prince Tella to the Olomore area of Abeokuta, where local leaders and party members were in attendance. Hon. Sunday Akintona, a respected leader in ward 12, praised Engr. Abolurin for his strong support of the APC party from the grassroots level, noting that his donation was a clear demonstration of his unwavering commitment to the party’s success.

Engr. Abolurin, who has demonstrated his dedication to the party in many ways, stated that he was committed to seeing the APC succeed in the upcoming elections, and that he believed Prince Tella was the right candidate for the job.

He went on to say, “I am proud to support Prince Tella and the APC in this campaign. I believe that together, we can make a real difference for the people of Abeokuta North and the state of Ogun.”

The event, which was attended by a host of local leaders, including Hon. Adekunle Adeshina, Alhaji Bakai Okedara, and Hon. Ayo Oluajo, was a rallying call for the party’s strength and unity at the grassroots level. With the support of local leaders and party members like Engr. Abolurin, Prince Tella is well-positioned to secure a victory in the upcoming elections and represent the interests of the people of Abeokuta North.

As the election approaches, Engineer Adebare Abolurin’s unwavering commitment and dedication to the party’s mission and values has served as an inspiration to many.

His generosity and leadership will be a driving force in the campaign and will be vital in securing a victory for the All Progressives Congress.